When faced with the responsibility of raising a three-legged dog, some people might have tried to shelter their pup from the world. But not Brianna and Brendan O’Rourke, parents of the energetic “tripawd” Brewski.

“He’s very much a retriever where he loves to get dirty, loves the water, loves to be wet and muddy,” Brianna says.

“He doesn’t struggle. He doesn’t even know that he’s missing a fourth leg,” Brendan adds.

So when Brewski had the chance to tackle the Ruff Mudder obstacle course, “We were like, ‘Heck yeah, we want to do this!’” Brendan laughs.

Born with a birth defect, Brewski is missing part of his front right leg—but he’s never let that hold him back. Ruff Mudder, his latest challenge, is the canine-focused companion to the famous Tough Mudder endurance event, with steep climbs, jumps and, yes, plenty of mud designed to test dogs’ endurance. With the support of his parents and the help of dog trainer Victoria Schade, Brewski prepped for the event like a true athlete—and his performance proved the power of hard work and a go-get-‘em attitude. 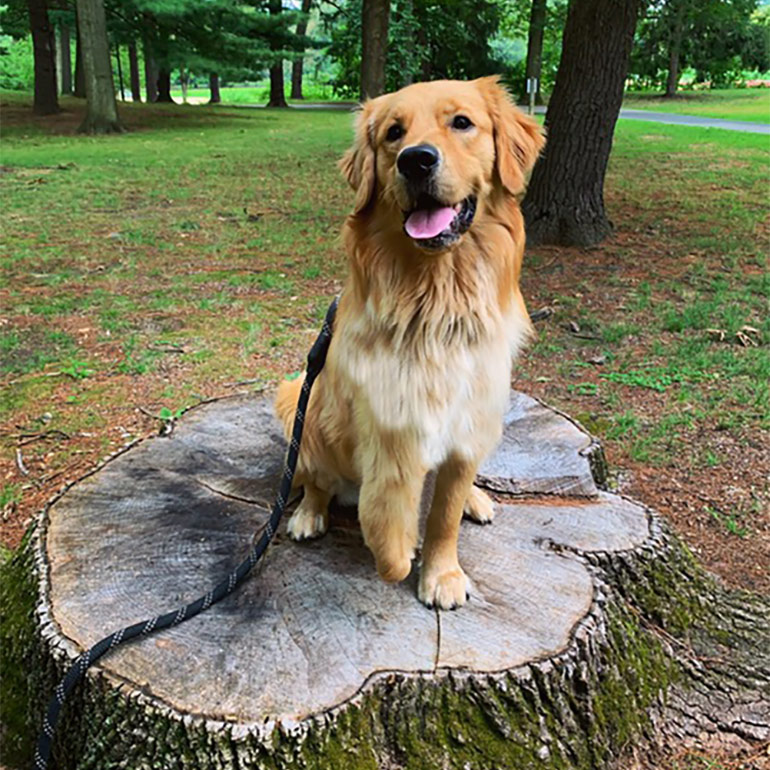 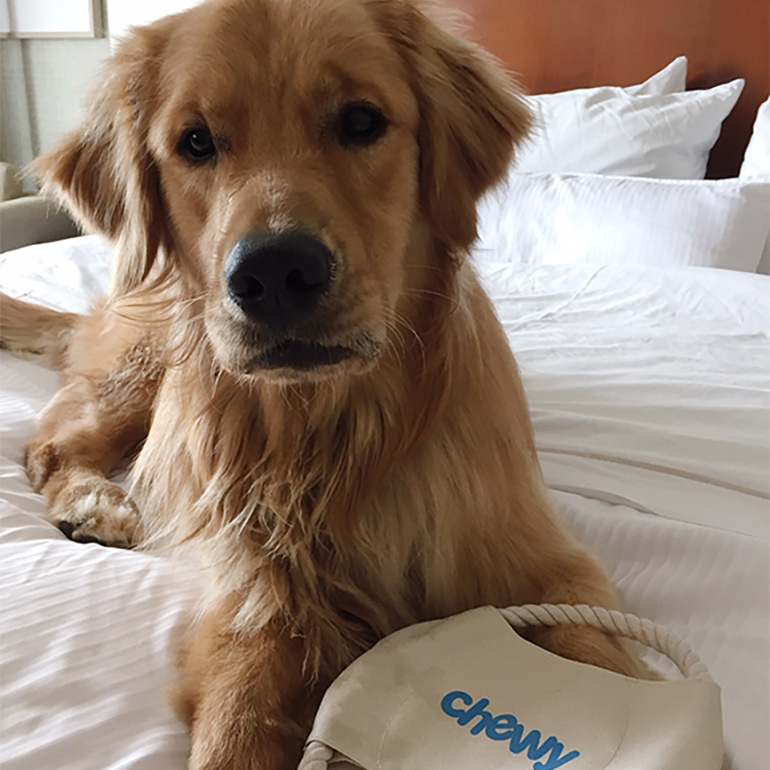 In 2018, Brendan’s sister, a vet tech, told the Nutley, New Jersey, family about a litter of puppies she’d helped. One of the puppies, she explained, had been born with only part of one leg. Because the mama dog belonged to a breeder, the O’Rourkes knew the pup’s future was uncertain.

“So we drove up to Massachusetts, where Brewski was, and ended up falling in love,” Brianna recalls. “He came out hobbling along … and we brought him home that day.”

At home, the O’Rourkes began training Brewski for everyday situations they thought might be challenging for a pup on three paws—and Brewski’s abilities kept surprising them.

“There were a lot of steps in our apartment at the time, and he went up and down no problem,” Brianna recalls.

They brought him to dog parks, where he socialized with and learned from other dogs.

“We live in New Jersey, so it’s a lot of pavement, and when he was younger, his nub would rub on the pavement a little,” Brianna says, “but at this point he really doesn’t have any problems.”

Fast-forward to today, and Brewski is a fun-loving, energetic, sweet 1-year-old dog with a love for getting messy. So Brianna and Brendan jumped at the chance to sign up for Ruff Mudder, seeing it as an opportunity to push Brewski’s skills to the next level.

Ruff Mudder, which is sponsored by Chewy and Landmark dog food, features seven obstacles for dogs to crawl and climb their way through:

Canine participants must be leashed at all times, and pet parents run the course with them.

“We’d never taken him to an event like that. That was our first,” Brendan says. “But we had been taking him to local parks. We took him on runs.”

In other words, Brew was ready for a new challenge.

Brewski trains at his neighborhood playground. Courtesy of @brewski.o

That’s where Schade came in. An experienced trainer, Schade has a deep understanding of dogs; in fact, she’s one of the handlers behind Animal Planet’s annual “Puppy Bowl” event. She worked with the O’Rourkes to help prepare Brewski for the literal obstacles ahead.

“I found out pretty quickly that Brewski was capable of everything. There’s nothing that holds Brewski back,” Schade says. “In that first conversation [with Brendan and Brianna], we talked more about his history with training—what he knows how to do, and that he had done obstacles in the past, which lent itself beautifully to some of the [Ruff Mudder] obstacles.”

“The most important thing for us was making sure he didn’t get overtired,” Brianna recalls of that first chat. “I did tell her, ‘He’s only running on three legs, so he gets way more tired than the average 4-legged dog.’ When we’re rooting him on, when we have treats, or even when there are other people or dogs around, he’s way more motivated—he’s not focused on being tired. So we made that our first focus.” 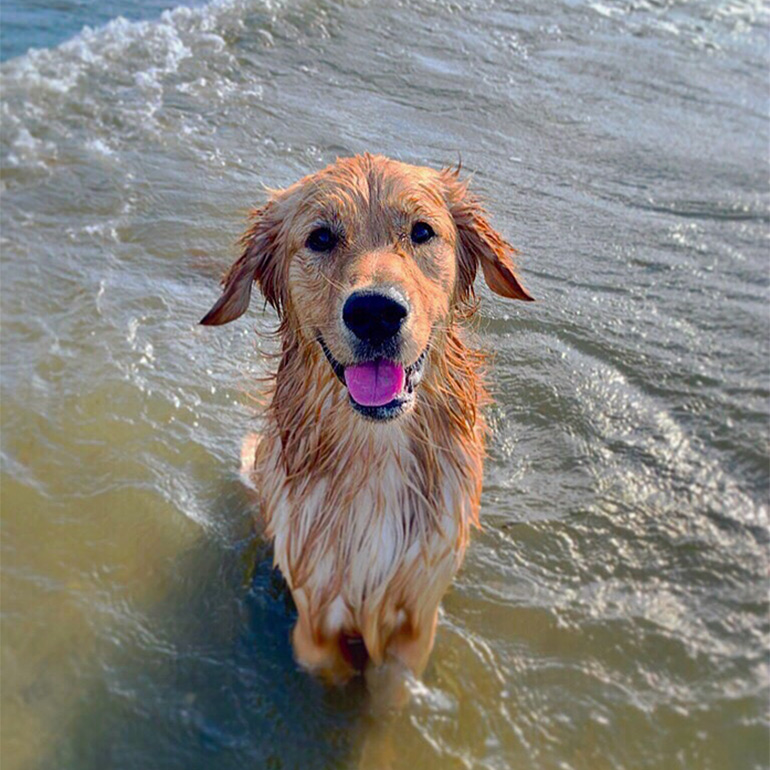 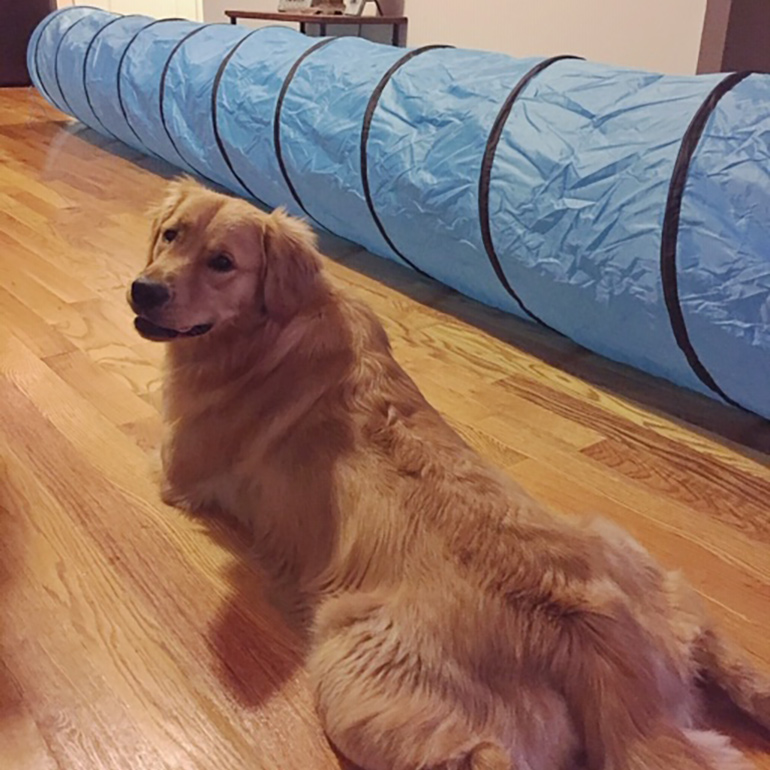 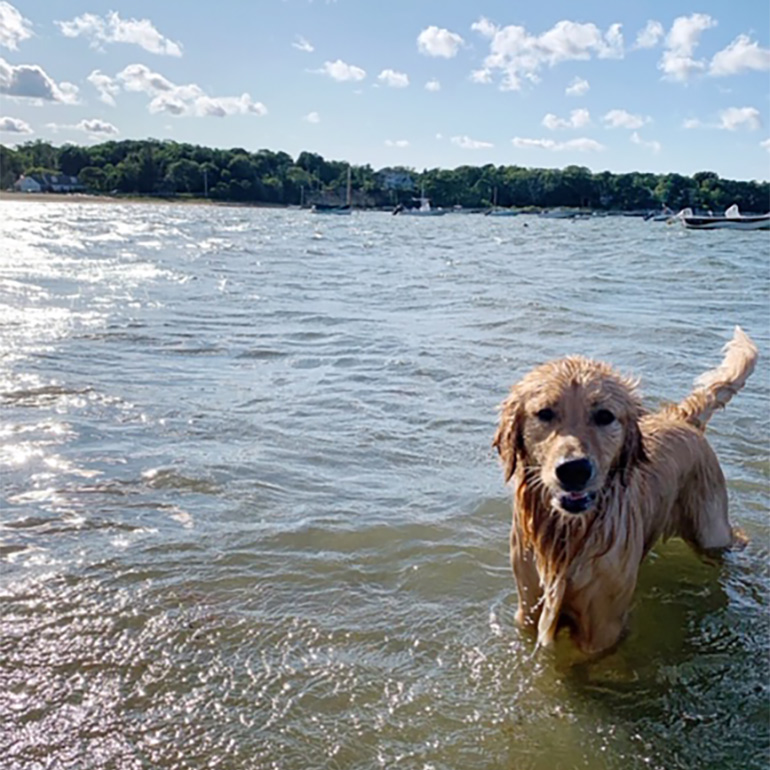 Brewski trained hard, both on land and in the water (but especially in that tunnel). Courtesy of @brewski.o

After their discussion, Schade drew up a training program for Brewski, with exercises based on the obstacles he’d encounter at the Ruff Mudder event in Pittsburgh, Pennsylvania. This was no simple task.

To imitate the steep incline of climbing obstacles like Mini Everest and the Mudderhorn, Schade suggested taking Brewski to a playground and enticing him to climb up a children’s slide. To prepare him for leaping over the daunting Mini Berlin Wall, she asked the O’Rourkes to place a broom across two chairs and train Brewski to jump over it, gradually increasing the height as he got comfortable. The Mud Mile, a wide, muddy pool for dogs to either jump over or wade through, would be a no-brainer for this water-loving pup—no special training necessary.

But Brewski’s favorite part of training was the tunnel, which Schade suggested to prepare him for the Boa Constrictor.

“The tunnel that Chewy gave us, I swear it’s his favorite toy,” Brendan says. “We throw treats in there and he runs back and forth. We put it in the backyard, too, and he just goes up and down.”

“We trained basically every day when we got home,” Brianna adds. “We left the tunnel out in our living room for probably a little too long,” she laughs. “We would literally just be sitting here watching TV or Netflix and see him go back and forth in the tunnel on his own, which was pretty hilarious.”

The pair also made regular trips to the playground for slide-climbing and took Brewski swimming during the summer to build up his strength.

Brewski and Brendan train for their climb up Mini Everest. Courtesy of @brewski.o

After about three weeks of training, Schade, who’s based out of Doylestown, Pennsylvania, visited the O’Rourkes to check on Brewski’s progress. It was about a week before Brewski was due to tackle Ruff Mudder.

“He has incredible parents. They had done the homework,” Schade recalls. “Brewski was ready to go! He’s just a doggish dog; he doesn’t let the ‘tripawd’ thing slow him down.”

The three took Brewski to their neighborhood park to show Schade his new slide skills. Then they returned home, where she could watch his progress with his favorite toy tunnel.

“By the time I got there, he had no fear or reticence going into it,” Schade says.

But there was one additional concern shared by both the O’Rourkes and Schade: In addition to not allowing Brewski to get overtired, they also had to make sure he didn’t overheat.

“It was a very hot day out and it was very humid, so she saw how tired he got,” Brianna adds. “So that was our main focus: Listen, if he does get too tired, we will just hang back and wait for him.” 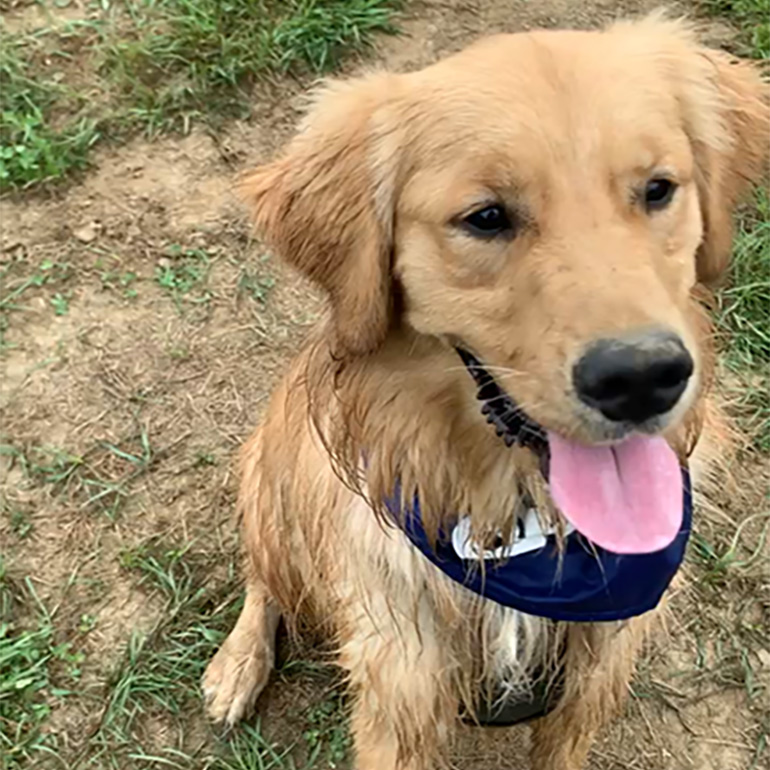 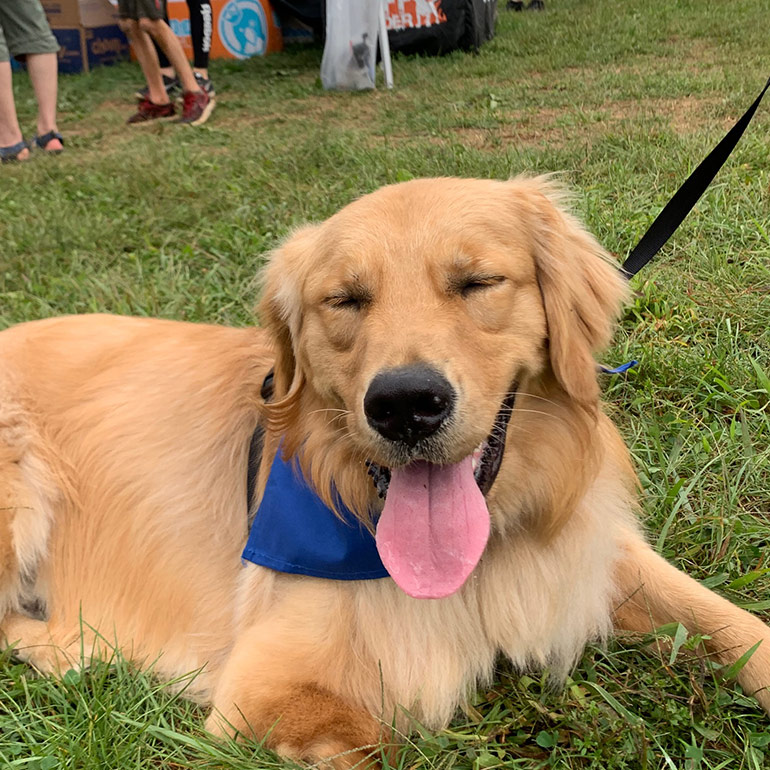 One happy champion. Courtesy of @brewski.o

Luckily, the weather in Pittsburgh on September 7 was in Brewski’s favor when they arrived for Ruff Mudder; “65 and overcast,” Brianna remembers. The family arrived at the course excited and eager to go, but with restrained expectations. Seeing the course in real life was a little intimidating at first, at least for Brewski’s parents.

“I’m not gonna lie, there were some [obstacles] where I thought, there’s no way he’s going to be able to do this,” Brendan says.

But Brewski soon proved him wrong.

“When I saw him run up that turf with my wife, I was baffled,” Brendan laughs. “I’m like, ‘How did you get up there, buddy?’”

Brewski mastered the Mini Everest and Mudderhorn climbs. He balked a bit at the Berlin Walls—“he was kind of nervous,” Brianna explains—but eventually cleared them and moved on to other obstacles, including his favorite: the Boa Constrictor.

“He saw the tunnel and was like, ‘Oh, I know how to do this,’” Brendan says. “Someone came up to us and said, ‘Wow, all the dogs didn’t want to go through the tunnel—except your dog.’ We felt good about that.”

And yes, Brewski made the most of the Mud Mile.

Brewski splashes in the mud pit. Courtesy of @brewski.o

“There was just a big pile of mud, and he … went straight into the mud and started rolling. He literally just jumped right into the mud, face first, swimming, loving it. We were like, ‘Alright! This is going to be a good time,’” Brendan laughs.

Thanks to the cooperative weather, training and preparation, and Brewski’s own adventurous spirit, getting tired was never an issue. Well, not for Brewski, at least.

“I think I struggled more than he did trying to run up [the inclines],” Brianna laughs. “[At first] I was like, ‘Oh, this’ll be easy.’ Then I’m sliding [down the ramp] and he’s beating me to the top!”

Brewski on a roll. Courtesy of @brewski.o

Brewski truly conquered the Ruff Mudder course. Then he went back and did it again. And then again. That’s right—he completed the course three times in a row during his heat.

“Third time’s a charm,” Brendan says in a voice full of pride. “It was a ten out of ten experience for him, I’ll say that.”

Brewski and his parents had a blast at Ruff Mudder—so much, in fact, that they’re considering staging a return.

“We would definitely do that again,” Brendan says. “It was fun. It got him to do things he’s never done, and especially with him, we want to try to work as many muscles as we can. Stuff like this teaches him to use every muscle to make it work.”

“I think it opened our eyes to … try to explore things with him a little more,” Brianna adds. “Instead of saying, ‘Alright, you got tired on a walk, let’s go back home,’ here we were like, ‘Nope, you’ve got to finish it, let’s go.’”

The unique challenges of Ruff Mudder training can benefit many dogs, Schade says.

“Anything that enriches a dog’s daily life is a worthy addition—anything that encourages a dog to think creatively and problem solve and use their body to achieve a means to an end,” she says. “Working on hurdles and this kind of thing is just another way to work that brain.”

Plus, she adds, “It’s problem-solving for both ends of the leash. It’s not just creative thinking for the dog, but also exercise for the pet parent. Introducing something fun and unusual into a dog’s life is always a good idea, because [otherwise] we fall into routines.”

And for Brianna and Brendan O’Rourke, their Ruff Mudder memories serve as a reminder of their dog’s impressive and irrepressible resilience.

“Some people might expect the worst: ‘Oh, he’s got three legs, how is he going to get around?’ But me and my wife try to tell everyone that he’s doing just fine,” Brendan says. “He’s still kickin’ like a four-legged dog would. He’s got more energy than me and my wife combined. He really is a motivation to everyone.”